Genocide survivors speak of horrors of the Holocaust, Cambodia and Rwanda

By Justice4Survivors on 27 Jan 2014 • ( Leave a comment )
On Holocaust Memorial Day Freddie Knoller, Sokphal Din and Sophie Masereka describe how they lived through mass killings 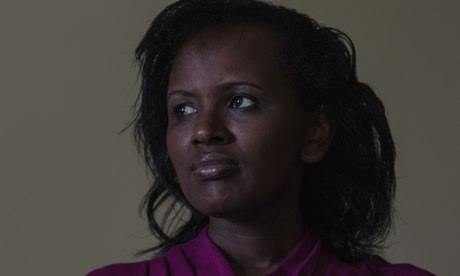 After the genocide that took from her a father, two brothers and a niece, which saw her survive malaria, a snakebite and a miraculously misfiring gun; after the genocide that forced her to seek sanctuary in ditches, bushes and a cathedral, Sophie Musabe Masereka made a silent promise.”I said to myself: ‘I will never get married and I will never get kids, because there is no point in being married if my husband is going to be killed; there is no point in having kids when I have seen entire families dying. I would rather stay the way I am’.”

Twenty years ago this April, Masereka, a Rwandan Tutsi who dreamed of becoming a nurse, watched neighbour turn on neighbour as the country’s Hutu majority embarked on a three-month campaign of systematic slaughter, during which 800,000 Tutsis and moderate Hutus were murdered.

Although tensions and violence between the two groups were common, the shooting down of a plane carrying the Rwandan president, Juvénal Habyarimana, on 6 April 1994 triggered a killing frenzy that was unprecedented in scale and ferocity.

“Before then, they used to kill quietly; after that it became open,” says Masereka. “I started hearing gunshots, people screaming, homes being burnt. Very early in the morning, I could see many people running in both directions: running, screaming, children crying.”

Her father, a Seventh Day Adventist pastor who had lived through the Rwandan revolution that preceded the country’s independence from Belgium, called his children together and told them: “All I can say is go find refuge, go find where to hide, but wherever you’ll be, keep praying. If we happen to meet, we’ll pray together.”

Sophie Musabe Masereka lost her father, two brothers and a niece in the Rwandan genocide but survived herself thanks to a misfiring gun.

They were not all to meet again. Five days later, Masereka watched as one of her brothers was taken to the side of the road and shot. After hiding in bushes, where she was bitten by a snake, she decided to return to her family, only to find them being lined up next to one of the newly dug pits that had appeared near Tutsi homes. Her younger brother tried to shoo her away. “He told me: ‘Go! We are going to be killed. We don’t want you to die with us’.”

His warning saved her life. Ten years ago, she gathered her brother’s bones and those of her father and niece from the pit and washed them.

The closest of Masereka’s many subsequent escapes came when she was picked up at a roadblock and told she would be shot. For some reason, the bullet that should have hit her fell from the barrel of the gun on to the floor.

Masereka believes it was God who brought about her escape; the brother who was with her at the time insists her life was spared because he paid the soldiers a bribe of 20p.

With the help of a neighbour, she managed to get to a cathedral in Kigali where 1,500 people were hiding. The number of sanctuary-seekers gradually diminished as Hutus arrived to take small groups out to be murdered.

After a while, they tired of the slow pace and told those inside that they would be back the next day with grenades. Once again, her luck held: rebels arrived that night to rescue Masereka and others.

Two decades on, her memories are as fresh as her grief. “Every day, I find a way to say my people’s names,” she says. “When I’m on the bus sometimes, I remember them and tears come to my eyes.”

Sokphal Din’s memories, grief and anger are equally vivid. He was 18 when the Khmer Rouge took Phnom Penh, dragged his family out of their house in the Cambodian capital and drove them into the killing fields, where, one by one, he watched them die of hunger, exhaustion and malaria. For four years they lived in the jungle as Pol Pot set about murdering 1.7 million people.

“It was like living in the dark ages,” says Din. “They called it Year Zero. There was no contact with the outside world. From time to time they forced us to move around like cattle. They kept doing that until we were completely tired and some died from starvation or disease.” 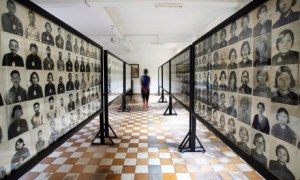 With no more sustenance than a daily spoon of rice, he began to find himself obsessed with food – and death. “We closed our eyes every night and dreamed about food; about chicken. But as I was about to eat it, I woke up. Then I’d try to go back to sleep again to continue the dream, and think: ‘Please let me finish that chicken’.”

His grandmother, whose ashes he still carries, died in his arms in the killing fields. His four-year-old brother was the next to die, succumbing to malaria after trying to fish for shrimp. As he watched his aunt perish and then his cousins, Din felt a monstrous envy.

“I looked at them and I thought: ‘You are so lucky! You’re dying now. You’re going now, you’re not suffering any more. I am the one who’s still alive here and I don’t know what’s going to happen to me’.”

He was freed in 1979 after the Vietnamese army invaded Cambodia. After living in a refugee camp and two years as a Buddhist monk, he came to the UK in 1987. Din still dreams, almost every night, of those four years, and of the opportunities denied him by the Khmer Rouge.

Thirty-two years before Din was forced into a life of exile and hard labour, Freddie Knoller, a Viennese Jew, was put aboard a train bound for Auschwitz.

“The trains had 10 wagons and 100 people squeezed into each one,” he says. “It was impossible to be comfortable there, but we organised ourselves: we got the old men, the women and the babies and the children who were there to sit or to lean against the wall.”

Although Knoller and the other young people in the wagon took it in turns to sit and stand, their efforts proved insufficient. By the time the train pulled in to the camp, one child and three of the older people were dead.

On arrival, he was given a uniform and had the number 157108 tattooed on his left arm. As his head was being shaved, he heard, for the first time, about old people and women being taken to Birkenau to be gassed and cremated. 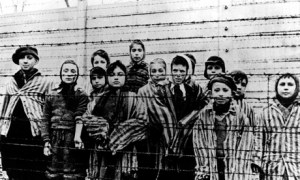 Children at the Auschwitz concentration camp just after it was liberated by the Soviet army on January 27 1945 – the date now commemorated as Holocaust Memorial Day. Photograph: AP

Despite meagre food and the back-breaking work of carrying 25kg bags of cement to the nearby IG Farben chemical factory, Knoller survived not only Auschwitz but also its death-march evacuation as the Russians approached in January 1945.

In Bergen-Belsen – where prisoners went without food for a month – he dug the ground in search of roots to eat. Others went to more desperate lengths.

“The ground was full of dead people and I saw with my own eyes young people finding sharp stones and cutting up the flesh of the dead bodies to roast over fire,” he says. “There was no more discipline.”

Knoller did not join them in either their cannibalism or their despair. From the moment he was captured by the Gestapo in France in 1943 until the day Bergen-Belsen was liberated by the British in April 1945, he refused to surrender his hope or his faith.

“I saw in the camps so many prisoners who were pessimists,” he said. “They gave in; they gave up; they didn’t fight for their lives, but I did fight. I believed in God and I still believe in God because I feel if I am in trouble, I can go back and beg God: ‘Get me out of here’.”

Today, at the age of 92, Knoller makes weekly visits to schools to tell students about the Holocaust. Din and Masereka, who also work with the Holocaust Memorial Day Trust to raise awareness of genocide, want the world to know what happened to them in the hope that others will be spared similar horrors.

Din is writing a book about his time in the killing fields between shifts on the checkout of a Sainsbury’s in Hampshire and his work as an interpreter.

“I want people to learn from the past and move on and do right,” says Masereka. “Who are we to destroy somebody’s life?”

In the end, she found herself unable to keep the promise she made as a 22-year-old: Masereka is married, has three children and works as a nurse.

Watch the harrowing testimonies of Freddie Knoller, Sophie Masereka and Sokphal Din. Link to video: Forgive or forget: survivors of genocide in the Holocaust, Rwanda and Cambodia describe their experiences