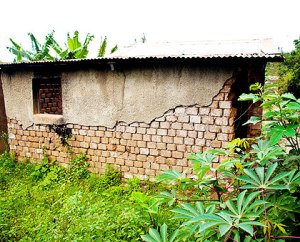 A dilapidated house belonging to an elderly survivor of the Genocide. The New Times/ Timothy Kisambira.

The government is mulling over plans to offer special assistance to vulnerable elderly citizens among the survivors of the 1994 Genocide against the Tutsi.

The plan would entail providing survivors with shelter and social services.

More than 1,400 elderly persons who survived the Genocide that left more than a million people dead, live in dilapidated houses, most of which were built by government through the Fund for Support to Genocide Survivors years ago.

In a social sector teleconference on Wednesday, the Minister for Local Government, James Musoni, told local leaders that government has set aside an estimated Rwf1  billion to build houses for the elderly and to hire social workers to take care of them.

“It is already bad to live alone. Imagine having to live alone, in a dilapidated house and with little to eat. We want a model that should have three or four elders in one house with a social worker caring for them so that they get decent food and medication,” Musoni said.

The local leaders agreed on a model being used in Gisagara District in Southern Province, where, Mayor Leandre Karekezi said they have already tried it out on families formerly living in thatched houses, locally known as Nyakatsi.

Karekezi said the model also facilitates easy access to the elderly when there is a message to communicate.

Gisagara has 188 elders in this category, and Karekezi said; “they need someone around to cook for them, and make sure they live in a hygienic environment.”

In a separate interview, Naftali Ahishakiye, the executive secretary of Ibuka, an umbrella of the Genocide survivors’ associations, lauded the new development.

“Some of the elderly survivors lost their children and kinsmen and now live in solitude and in despair. This initiative would be handy. Together, they can even afford to do some work and live longer,” Ahishakiye said.

He said apart from some health problem, their security was also a concern; some people used to steal their little harvests or livestock.

Participants in the conference suggested that elderly persons who own farms should be settled in the vicinity to ease  farming activities.

Theophile Ruberangeyo, the executive secretary of FARG, said the programme is targeting 1450 genocide survivors who, not only have a feeding problem, but also have serious medical concerns.

Minister Musoni tasked FARG officials to work on details of the plan which include, designing the model house, or upgrading existing houses that can accommodate more elders, and recruiting the social staff who can be one or two per village among others.

All should be set by late November, he directed.

Houses estimated at Rwf10 million each in urban settlement and Rwf4 million in rural areas will host between three to four elderly persons, and districts are to use the Reserve Force for construction works, according to the envisaged plans.

Beneficiaries of the programme are also entitled to other national programmes designed for the poor such Ubudehe, where the poorest of the society get direct monthly cash support of Rwf7,000 per individual, as well as support to access loans for income-generating activities.