The Boy From Nyarushishi Refugee Camp Is ALIVE. 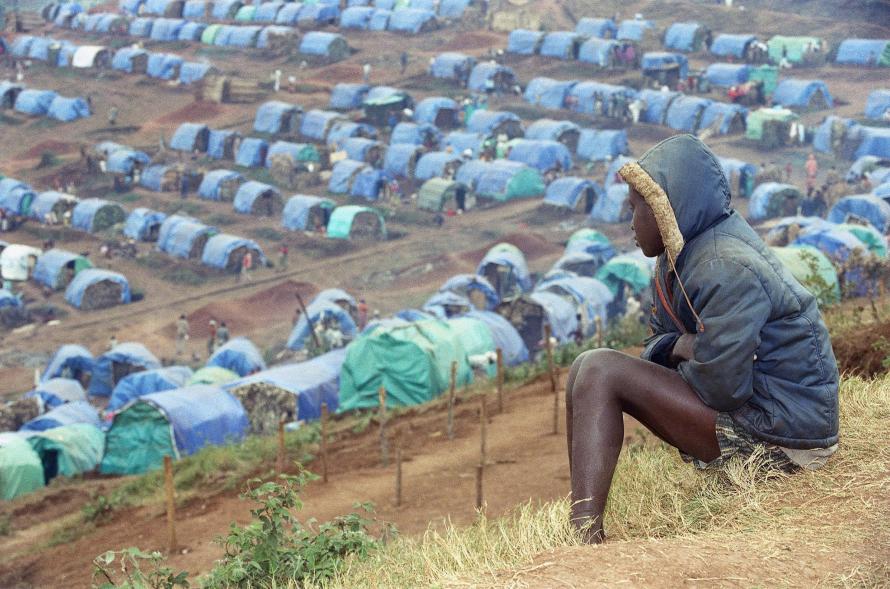 Eric Kamuzinzi, (37-year old now), a genocide survivor who discovered a photograph of himself when he was 13 years old amidst the 1994 Rwanda Genocide against the Tutsi

When the Genocide erupted April 7, 1994, he was dressed in that jacket, a t-shirt and shorts. He wore the same cloths until September 1994 when the new government arrived and told them to return to their no-longer-existing homes.

Today, the 13 year-old Eric Kamuzinzi whose photo is one of the few remaining items that show the existence of Nyarushishi camp, is a complete transformation.

For nearly 12,000 Tutsis who lived in Nyarushishi from April to September 1994, it is a period they never wish for anybody else. And as KT Press reports, Kamuzinzi witnessed his father taken from a stadium by genocide militia, nearly starved to death and lived through presence of French commandos.

Type the word “Nyarushishi” into any online search engine, and this particular photo comes at the top. It features alongside those of French soldiers who had crossed into Rwanda from Zaire-current Democratic Republic of Congo. They came with journalists to document what had been billed as a “humanitarian mission”.

On the night of April 6, the Rwandan president is killed as his plane is shot down on descent above the Kigali airport. The hours that followed saw government soldiers and civilian militia ‘interahamwe’ set up roadblocks across Rwanda: the Genocide against Tutsi was underway.

The Kamparampaka stadium located in Cyangugu city center was where thousands of Tutsi fled. Local officials, the communal police, gendarme and army encouraged them to seek refuge there. It was the only safe place: or so they thought.

“My father was taken away as we held hands”

For days and nights, officials entered the stadium and read out names on a megaphone. Those whose names were mentioned were taken – never to be seen again. For every round of lists, survivors and perpetrators, have testified that at least 50 men and women were taken away.

“On many occasions Prefect Bagambiki himself was leading men who read lists…,” says Kamuzinzi in reference to the Prefect (governor) of Cyangugu Prefecture at the time. Bagambiki was arrested in 1998 on a UN indictment for Genocide, but was acquitted in 2004 by the UN court set up to try Genocide perpetrators.

“One day, they came. I was standing with my father and they took him away. It was the last time we saw him,” narrates Kamuzinzi.

In early May 1994, a new plan came up. To relocate the Tutsis in the stadium away from the city. The hilly Nyarushishi area, about 15km away – is where they were ferried in government buses escorted by soldiers. The relocation took several days.

According to testimonies by perpetrators to the UN court, the relocation was conducted so that when the mass massacre was carried out, the slaughter would be done far away from any public notice. Thousands of Tutsis were in the stadium and the regular read out of lists was going too slow.

Nyarushishi site was surrounded by acres and acres of tea plantations. Nobody live here. There was no single tree as the hills had for years been stripped bare of any vegetation.

“The cold was unbearable,” is how Kamuzinzi remembers the time they arrived around May 16. He remembers all the dates because he says that period was “worst time of my life.”

Aid workers from the International Committee of the Red Crescent (ICRC) arrived and set up a small tent health center on the edge of the camp. For weeks, they received dying and wounded tutsi who had been attacked, raped women and starving babies.

Inside the camp, people were organized according to the time when they arrived from the stadium. The ‘suburbs’ of the camp were numbered “Stade 1”, Stade 2 – and so on. When a resident mentioned the ‘stade’ with figure, everyone knew which part of the camp they were based.

Kamuzinzi has no recollection of when this photo was taken. But remembers many journalists came to Nyarushishi camp. But still vivid memory of the exact spot. He sat here every evening engulfed in thought of a bleak future.

KT Press retraced the journey to Nyarushishi with Kamuzinzi. Today, the site dotted with the blue tents back then, is lined with a well-established community.

In the foreground hidden away on the left of this photo was the ICRC facility. It was less than 10 meters away from the exact spot where Kamuzinzi is seated. He sat facing it.

In mid-June, the French government in Paris approved entry into Rwanda of its 2500 troops stationed across in Zaire on Thursday June 23. The first troops crossed into Cyangugu town.

In Paris, within hours the military headquarters announced three mass graves were found by the advancing commandos. But the discovery of the mass grave was mentioned in single sentences from the barrage of news stories which were concentrating on the troop deployment.

RTLM hate radio reported on the same day from Gisenyi – up north – that the French soldiers had come to “help us fight the RPF”. The broadcaster also said the French would be providing weapons. It called on “Hutu girls” (abakobwa b’abahutu) to put on frocks to welcome the French.

French academic and historian Gérard Prunier has documented rare details leading up to the decision to deploy French commandos to Rwanda. Prunier wrote in 2000 that France’s initial plan was to go to Gisenyi, but decided to enter through Cyangugu to “rescue” the Nyarushishi people.

By settling on going in Nyarushishi, according to genocide researcher Prof Linda Melvern, the politicians in Paris saw this as an opportunity to show the world that they were neutral. And so, accompanied by journalists the commandos drove into Rwanda.

During the same period, however, according to Prunier, in a less publicized move, French officers visited the ‘interim government’ at Hotel Meridien in Gisenyi. They delivered supplies and equipment.

The commander of the retreating former government troops Maj Gen Augustin Bizimungu declared in media reports from the time that his forces would launch an offensive against RPF.

It was on June 25 that first unit of 50 French commandos with mass of journalists arrived at the Nyarushishi camp. There are countless images of the deployment. Kamuzinzi remembers them taking cover on the overlooking hills. They set up an unmarked cordon between the displaced in the camp and militia armed with all sorts of crude weapons.

“The Men Who Killed Me”

What the Nyarushishi camp residents witnessed in the proceeding weeks will remain with the survivors for generations.

For weeks, women and young girls in the camp lived through horrific experiences. Samer Muscati, director of the International Human Rights Program at Toronto University law faculty, documented their plight in a book published in March 2012.

“The Men Who Killed Me” features testimonials from 17 survivors. Through their narratives and Samer Muscati’s powerful portraits of them, these 16 women and one man bear witness not only to the crimes they and their countrymen endured, but to the incredible courage that has allowed them to survive and flourish.

In interview with The Times, Eliezer Niyitegeka, the information minister at the time, confirmed that buses and trucks were crossing the border to “provide transport for refugees”. Niyitegeka died in March this year from a Mali jail where he was serving life sentence for his role in the genocide.

In Kigali, a new government comprising the RPF and other parties had been formed and sworn in July 19, 1994. RPF troops – who were now in government, arrived at Nyarushishi camp in September.

“You can’t imagine how happy everyone was when we saw inkotanyi,” said Kamuzinzi in our interview.

“We had been hearing Inkotanyi were in other places. So we waited eagerly for them to save us. There are times when rumors would circulate that Inkotanyi had come. This prompted people to run towards the hills to meet them only to find it was a false alarm.”

Cyangugu was within the infamous French “zone turquoise” – covering a large sway of south western Rwanda. While other regions had come under RPF control in early July, it would be weeks later, and eventual pullout of the French, that the entire territory was declared liberated.

The new government forces embarked on a resettlement exercise for the survivors. Kamuzinzi with his mother and siblings – like the tens of thousands others began the uphill task of rebuilding their lives.

Kamuzinzi’s mother had been a teacher before the genocide, just like their missing father. So she returned to class when schools opened in early 1995.

Kamuzinzi went back to secondary school at Karubanda seminary – eventually university in 2001 where despite the hardships at the time, he completed five years later.

Today, he is a social affairs officer in one of the sectors of Rusizi district.

Kamuzinzi tells us he first saw the Nyarushishi camp photo of him in 2015 when he got urge to do internet search.

“The feeling just arose so I went online and put the word ‘Nyarushishi’ in Google search. It was among top images. But there were many other photos from the camp showing French soldiers,” he narrated.

According to records we have obtained, the image was taken August 25, 1994, by journalist Jean-March Bouju reporting for The Associated Press (AP) news agency.

As for the missing father, Kamuzinzi tells us; “We gave his remains a decent burial at the memorial site” on June 23, 2018 when 3,516 newly discovered victims from the region were laid to rest at the Nyarushishi site where already 4,738 were buried.

Kamuzinzi got married last year. His wife also survived the horror in Nyarushishi camp. They had a two-month old baby girl when we conducted the interview three weeks ago.