Kwibuka 20: Nation gears up for tour of Genocide torch 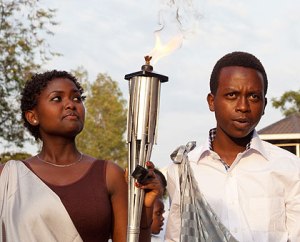 On Tuesday, Rwanda officially launched Kwibuka 20, a series of events organised in the run-up to the 20th commemoration of the 1994 Genocide against the Tutsi. For some, it’s early in the year and it sounds unusual given that talk of official commemoration of the Genocide normally starts in April every year because it’s on April 7 that the commemoration starts in Rwanda and stays on for three months until the Liberation Day on July 4. But three months in the lead-up to April 7 when Rwandans begin national mourning of the victims for the 20th time, are going to be busy, packed with activities that reflect on the 20 years since the Genocide and reflect on how the country has rebuilt since.

In the country, what is clearly going to be at the centre of attention is the symbolic countrywide tour of a flame of remembrance, dubbed “Kwibuka Flame.”

It was lit at the Kigali Genocide Memorial Centre in Gisozi on Tuesday and will be taken on a lap of honour through the country’s 30 districts before returning to Kigali on April 7, the beginning of the national mourning period.

It is definitely going to boost reflections, discussions, memory, and resolve for “Never Again” when the Genocide torch reaches historic sites across the country. Historical in a way that that’s where some of the worst killings took place during the Genocide in 1994 and before.

In Ngororero District, Western Province, the Genocide torch will be lit at Nyange School on Friday, giving residents a chance to reflect on the role the Catholic Church played during the Genocide in 1994 and the resilience of secondary school students who refused to separate themselves along ethnic lines when they were attacked by killers in 1997.

When the torch arrives in Karongi, Western Province, residents will reflect on the role of France during the 1994 Genocide.

In Kicukiro District, the torch will be lit at the former ETO Kicukiro, the current Integrated Polytechnic Regional Centre-Kigali, where the United Nations abandoned fear-stricken Tutsis in a time of need.

At this school, thousands of helpless innocent lives were left by UN troops at the mercy of the interahamwe militia.

In every area where the Genocide torch will be hosted, people will naturally recall how their neighbourhoods looked in 1994 and how they have since transformed.

Jean de Dieu Mucyo, the executive secretary of the National Commission for the Fight against Genocide (CNLG), said three months in the lead-up to the 20th Commemoration of the Genocide should be a chance to involve every Rwandan in thinking about the Genocide history and what they can do to move forward together.

“Some people still don’t understand what we are doing, why we remember. We need to keep talking to them and involving them to ensure that they understand,” he says.

At the district level where the Genocide torch will be arriving over the next few weeks, local officials and other community leaders have been asked to ensure that meaningful discussions are held to learn more about  causes of the 1994 Genocide and the country’s journey since.

The torch is a symbol of the Rwandan spirit of unity and hope which are seen as key to the reconstruction of Rwanda from the scratch since the Genocide.

There will also be discussions in different communities in the Rwandan Diaspora, with international conferences on the topic of Genocide slated to take place in Kigali and some foreign cities such as New York, London, Washington DC, and Addis Ababa.

April 7
Wreath laying and lighting of the national Flame of Mourning at the Kigali Genocide Memorial Centre.

April 7
National Walk to Remember and Vigil at Parliament and Amahoro Stadium.