A snapshot on a Possible International Trust Fund for the Survivors of the Genocide Against the Tutsi in Rwanda.

Campaign for reparation for survivors of the 1994 genocide against the Tutsi.

Rwanda genocide 20 years on: ‘We live with those who killed our families. We are told they’re sorry, but are they?’

From the Guardian, Sunday 12 May 2013 Nearly 20 years after the Rwandan genocide, Chris McGreal returns to Kibuye to meet the few Tutsis who survived – and some of the killers they are forced to live with as neighbours Paying the price: survivor Madalena Mukariemeria with her […]

It is estimated that between five and twenty thousand women were raped and bore children of that rape during the genocide were born as a result of rape committed against Tutsi women during the genocide. Nineteen years hence and the battle for mothers and the children born from […] 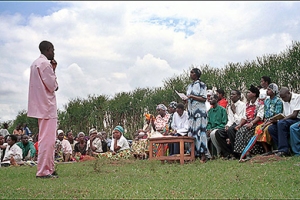 Close to two decades  have now passed since the start of the 1994 genocide against Tutsi in Rwanda.  As years go by, Survivors mourns and keeps the memory of their beloved ones in various manner.   Commemoration and remembrance remain critical characteristics of satisfaction  that is available to […]

GAERG-”May you not perish while I survive”

A guest post by Lindsey Hilsum, Patron of Survivors Fund (SURF). It is the season of remembrance.  On Saturday May 5th I went to the Sainte Famille Church in central Kigali to meet a group of some 200 genocide survivors who were heading to eastern Rwanda to commemorate […]