GAERG-”May you not perish while I survive” 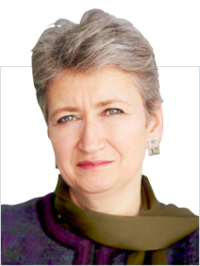 It is the season of remembrance.  On Saturday May 5th I went to the Sainte Famille Church in central Kigali to meet a group of some 200 genocide survivors who were heading to eastern Rwanda to commemorate families who were wiped out in 1994.

“I think this is especially important because we’re honouring people we don’t know,” explained one of the organisers. “Of course we mourn our own parents but these are families who may have no-one left to remember them.”

Every year the students visit a different part of Rwanda to remember such families. We drove for nearly three hours to the administrative office at Gatsibo, one of the most notorious places in the history of the Rwandan genocide. It was here that Jean Baptiste Gatete, a former mayor and at the time a government official, masterminded the killing of some 14,000 Tutsis. He later fled, but was captured in 2002 and in 2011 was sentenced by the International Criminal Tribunal for Rwanda to 40 years in prison for genocide and crimes against humanity.

We were to walk the three miles to the church where many were slaughtered. “This was their Calvary,” said the Deputy Mayor as she greeted us. 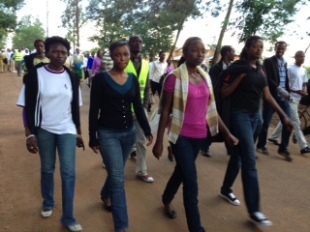 As we walked through the small town, I noticed three slender, elderly women in pristine long dresses quietly joining us. I wondered why more local people were not taking part before I understood: there were few survivors here. We walked along the road, past green maize and banana fields, now so peaceful, then so full of terror. Cars halted to let us pass, and a group of children who had not yet been born in 1994 briefly stopped playing with a hoop-and-stick to watch. I saw a middle-aged man leaning against a bicycle, two hens tied to the back, watching impassively as we walked by. This is not just a commemoration, I thought, it’s a warning: what happened here will never be allowed to happen again.

I fell into step with a young man called Camarade. He was three in 1994, too young to remember much. “I just have some images in my mind,” he said. “Like the image of my father being killed.” He and his younger brother, then just a baby, had been raised by an uncle. He was studying management and GAERG had become a substitute family. “If I feel weak, they are like my brothers and they help me,” he said. “And if one of them feels weak I can support him.”  His dream, he said, was to marry and have his own family.

Dusk was falling by the time we reached the church at Kiziguro where 3,000 were slaughtered and thrown into a pit. SURF is raising money for a memorial wall here, and has provided aid to the handful of survivors of the massacre. A bower, decorated in fairy lights, bore the legend: NTUKAZIME NARAROKOTSE, which translates as “May you not perish while I survive.” I thought of the guilt survivors often feel, just for being alive. 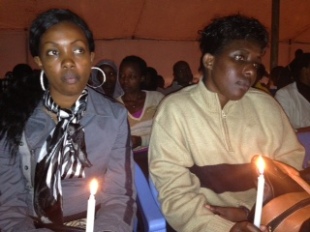 We sat in an open fronted marquee to listen to speeches by local officials and a historian who described in detail what had happened in this place. Local teenagers held candles as the names of families who had lost mother, father and all children were read out. Great torrents of rain started to fall and wash across the red earth where the victims had been killed with machetes and nail-studded clubs nineteen years ago. The crowd gasped and sighed as testimony from the handful of survivors was shown on a large screen. When a photo of Jean Baptiste Gatete came up they hissed.

Late at night I left to return to Kigali. The students remained, preparing to pray, sing and honour the dead until dawn.

Lindsey Hilsum is International Editor of Channel 4 News. She was one of the few journalists in Rwanda at the start of the genocide in 1994, at the time working for UNICEF – an account of which she reports here