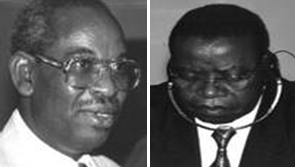 The International Criminal Tribunal for Rwanda (ICTR) will hand down its appeals judgment on September 29 in the case of two former Rwandan political party leaders, Hirondelle learned hirindelle on on monday

Matthieu Ngirumpatse was president of the MRND party, while Edouard Karemera was its vice-president. The MRND was the party of former head of state Juvénal Habyarimana, whose assassination on April 4, 1994 sparked the genocide.

The two men were sentenced to life imprisonment by the lower court in December 2011 after it found them guilty of genocide, crimes against humanity and war crimes.

According to the first-instance judgment, they neither tried to prevent nor to condemn the crimes committed in 1994 by the youth wing of their party, the notorious Interahamwe of the MRND.

Addressing the court during appeals hearings in February, Ngirumpatse’s defence lawyer Frédéric Weyl argued that the former MRND president had “no authority” over party members or government ministers in office during the genocide.

“Matthieu Ngirumpatse had no judicial, police or military power (…),” said Weyl. “He did not have the power to expel or sanction anyone (…) A political party is different from a government or military structure.” Weyl called for the court to acquit his client.

Félix Sow, one of Karemera’s two Senegalese lawyers, argued along similar lines. He also called on the appeals court to “overturn all the convictions”.

Ugandan prosecutor George Mugwanya told the court that the two men had a common agenda to kill Tutsis. He said that they had abused their positions within the MRND as part of a joint criminal enterprise.

The trial started in November 2003 but was subject to many delays, owing mainly to Ngirumpatse’s health problems.

Joseph Nzirorera and former Education Minister André Rwamakuba, who was a member of an opposition party to President Habyarimana.

But Rwamakuba’s case was finally separated and he was acquitted on September 20, 2006. Nzirorera died of illness on June 1, 2010, when his trial was near the end of the defence stage.